He’s known for unforgettable quotes like “Float like a butterfly, sting like a bee” and “Don’t count the days, make the days count. But little did the man behind those quotes, Boxer Muhammad Ali, who died last year know that his powerful words were shaping a local boy into a man who is taking the boxing world by storm.

That man is 19-year old Raekwon Johnson, a Carpentry major at Columbus Technical College in Columbus, Georgia. Johnson, a Freshman at CTC has had a passion for the physical sport since the age of five when he started watching footage of Ali making history inside and outside the ring.

"I want to be the best and become the Welter Weight Champion one day,” says Johnson.

Right now Johnson is the 141-pound Georgia State Golden Gloves Champion. He’s headed to regionals in Knoxville, Tennessee April 20th– 22nd.  Even though boxing his number one priority, Johnson still plans to earn his Associates Degree in Carpentry from CTC. 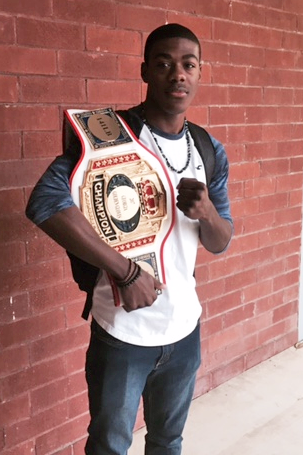 While admiring the commitment Muhammad Ali gave to the boxing world, Johnson says he’s equally committed. He trains four to five hours in the gym Monday through Friday while running five miles at the crack of dawn on weekends.

Johnson got his start at Haygood Boxing Gym on Cusseta Road in Columbus at the age of 13. As he progressed, he moved onto the Game Bred Boxing Club on Highway 165 in Phenix City, Alabama.

“I consider myself a role model says Johnson. If I can show other kids that you can accomplish anything you set your mind to do, it can happen, no matter where you come from or what obstacles you’ve endured in your life”.

Another goal of Johnson’s is to represent the USA in the 2020 Olympics. He’s already training for the Olympic tryouts taking place in Denver, Colorado October 15th-20th.

“I have very supportive people in my corner keeping me encouraged and making sure I keep my head on straight. And while I have come across some people who do not fully support what I am doing, I remain focused on achieving my dream of becoming a Welter Weight Champion”, says Johnson.