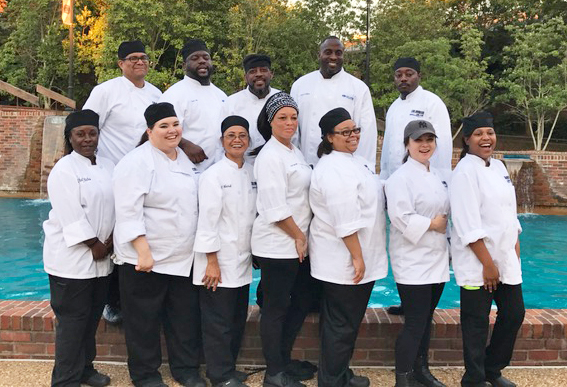 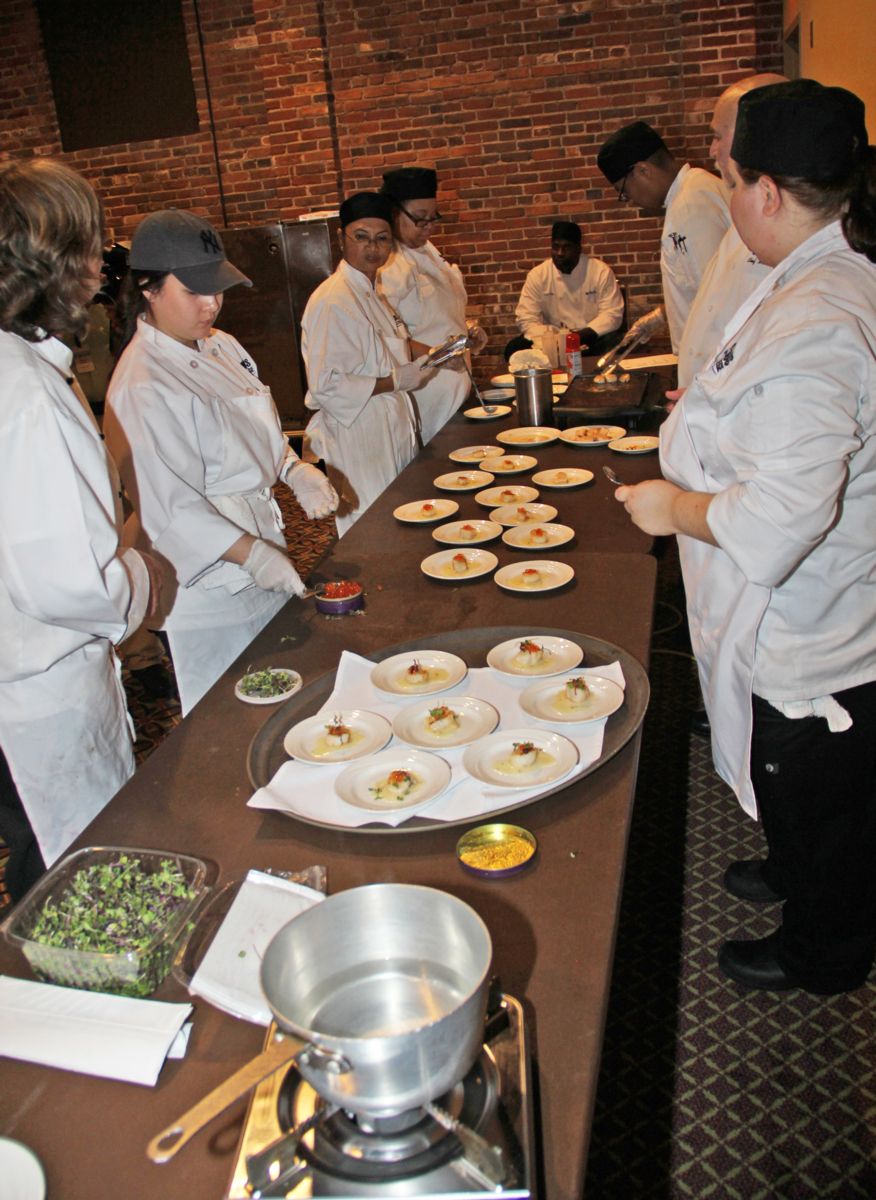 Behind the scenes in a very busy prep room. The food pictured was the appetizer – a seared scallop topped with caviar and microgreens. 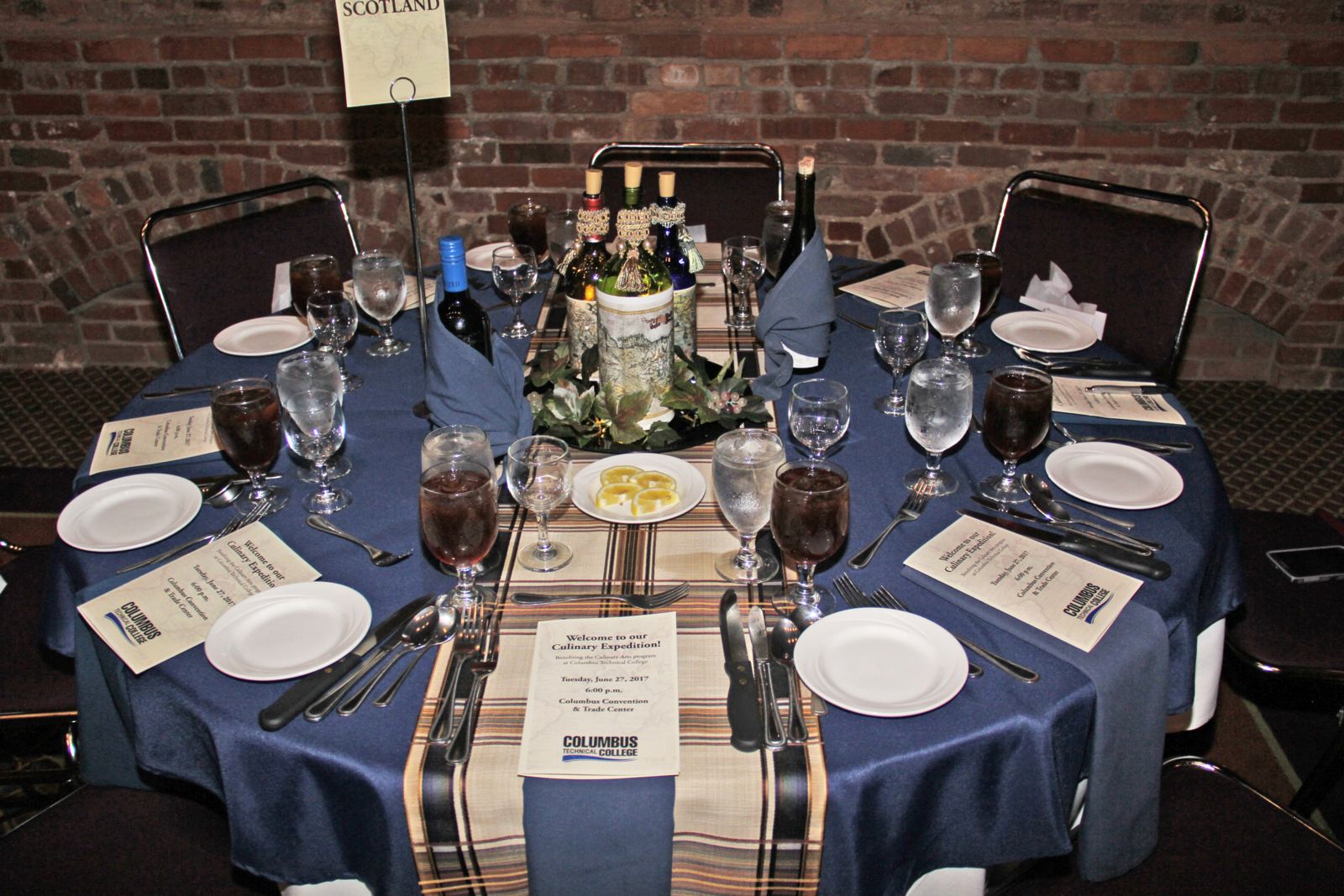 Each table was named in honor of a country to pay homage to our Culinary Expedition. Thanks to CTC Dean of Library Services Stephanie Middleton for sharing her decorating talents!

This event – called A Culinary Expedition – was held in room 104 of the Columbus Convention and Trade Center. More than 50 guests attended, providing ample practice for the students to find out what it’s like to prepare and serve food to a large group. There was even live music performed by CSU students. After expenses, the dinner raised nearly $6,300. 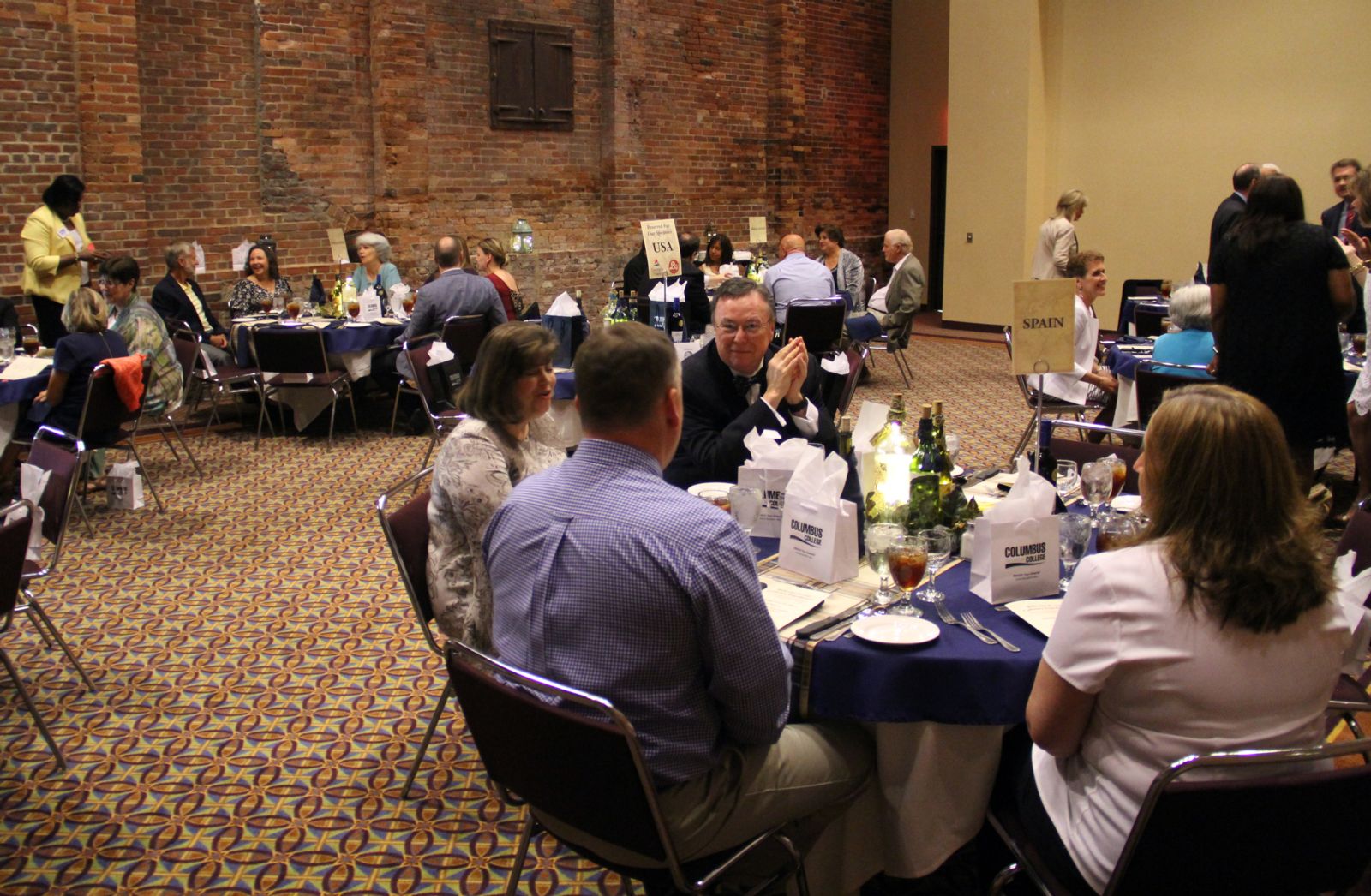 It was a packed house at the first culinary fundraiser dinner. 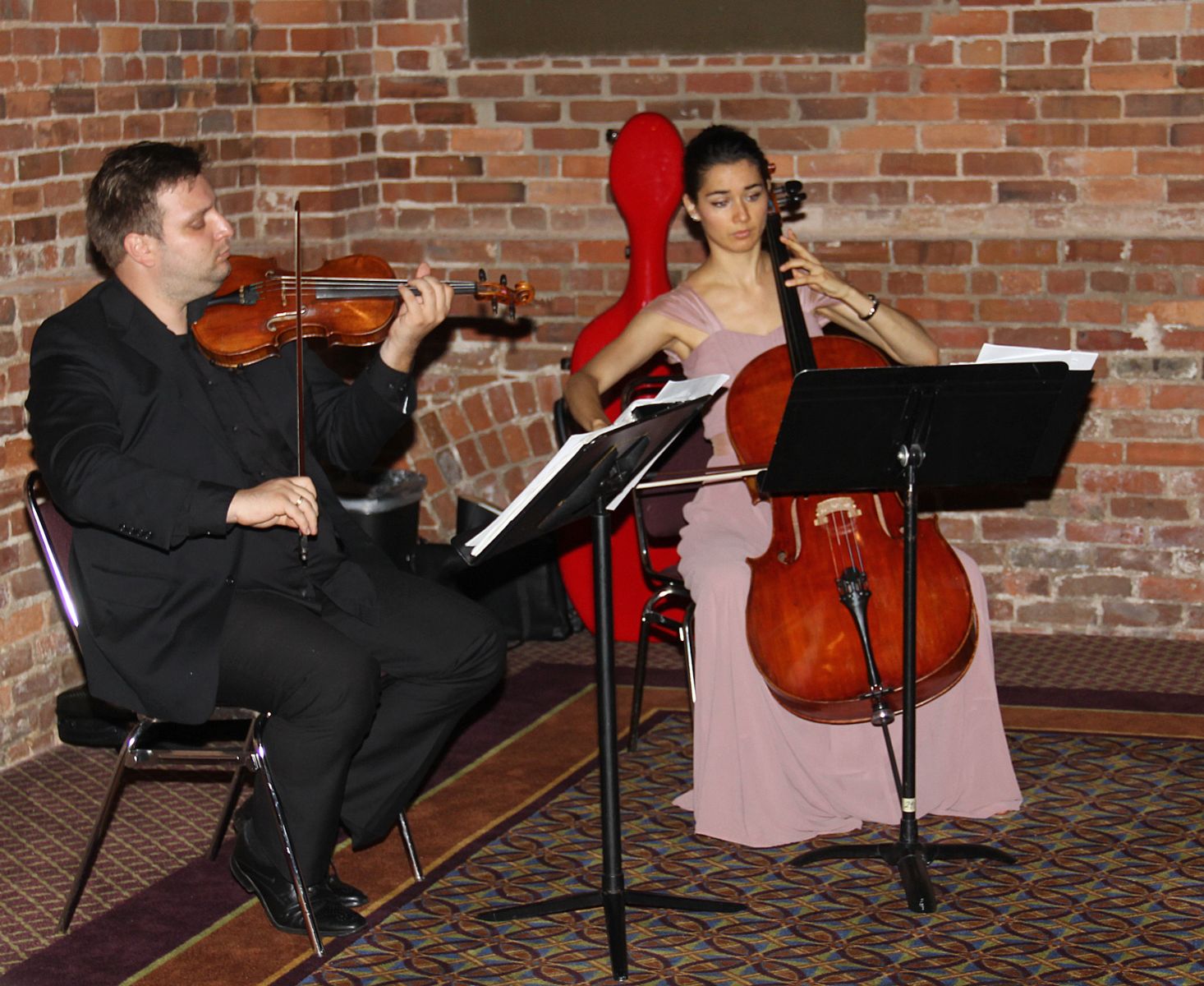 Besides dining on exquisite food like scallops topped with caviar, a smoked tomato gazpacho, apple smoked grilled pork chops with peach chutney and a chocolate mousse topped with candied bacon, guests also enjoyed a "reverse raffle." The grand prize winner took home a certificate for a catered meal for eight by the culinary students and chefs. 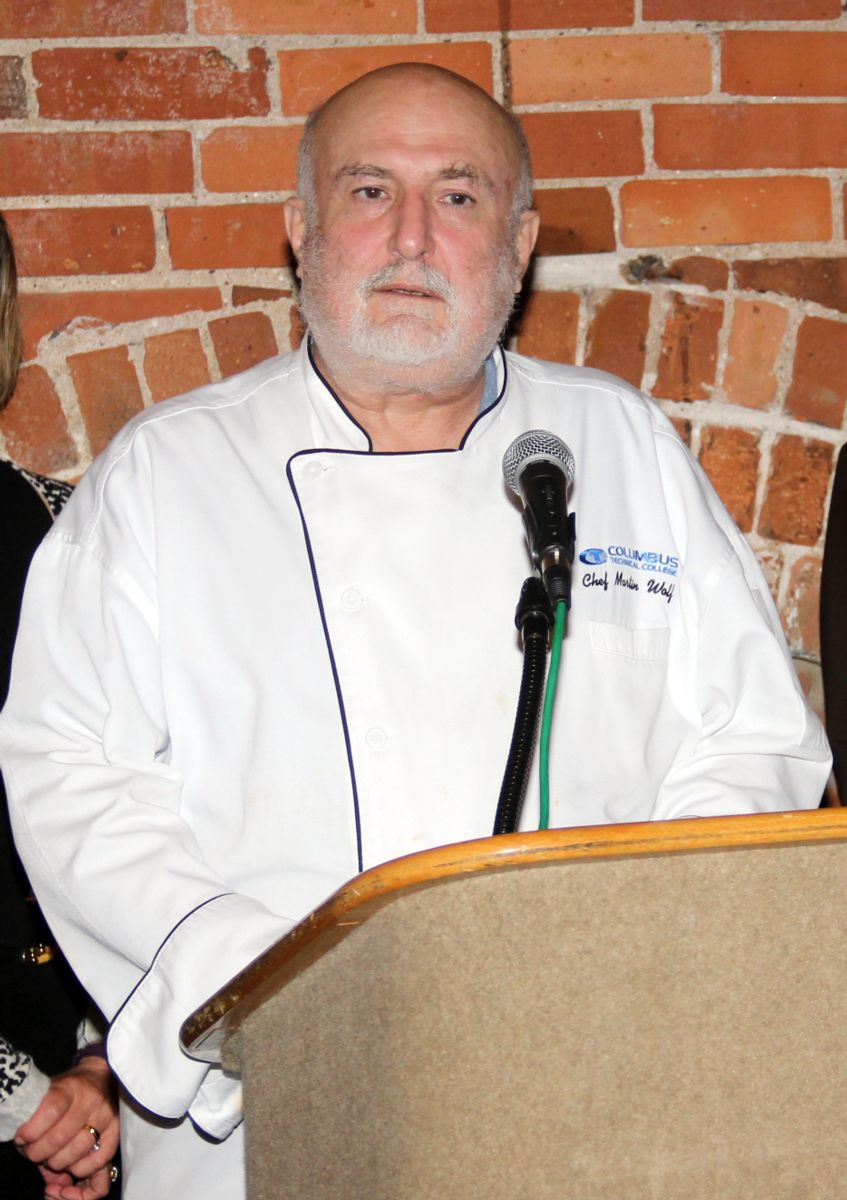 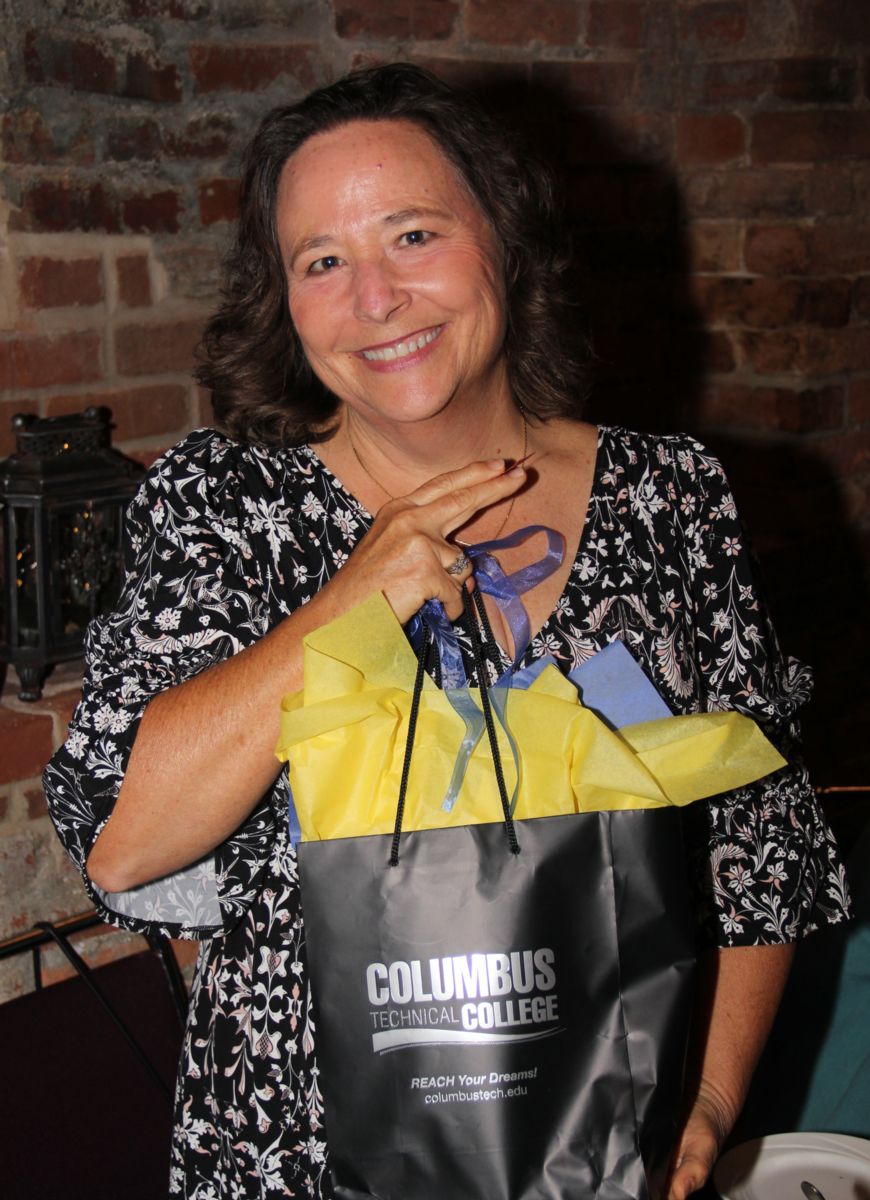 For her runner-up prize, Maridonna Hicks won a bottle of Richland Rum. 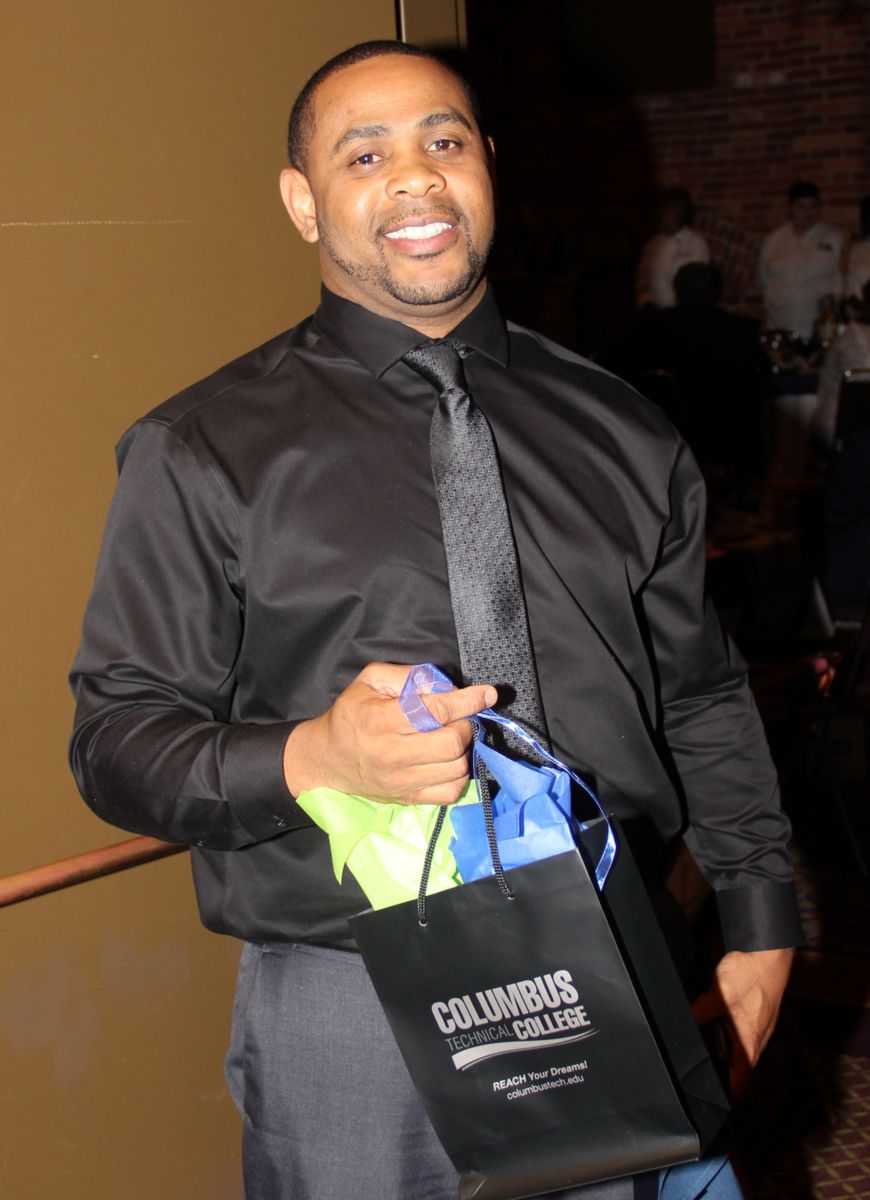 Wilbur Williams was the lucky winner of a catered dinner for eight!

Proceeds from the event will help fund a July 30 – August 10 trip to Ireland where the 12 students and one instructor will learn about international cuisine from chefs in the greater Waterford, Ireland area. Everyone participating in the “Irish Food and Culture Summer School” is required to have two professional chef coats as well as their own knife set. The cost of the former is approximately $30 each and knife sets can run between $100-150. The lead instructor for the culinary arts program, Chef Martin Wolf, calls the journey an once-in-a-lifetime chance. Many of his students have never left the state of Georgia – let alone be given the gift to learn from world-renown chefs.

“This is a wonderful opportunity for our students to witness and work in an international context. One of the greatest challenges for culinary students learning about other cuisines,” Chef Wolf said. “It used to be that French Chefs cooked French food, German Chefs cooked German food, etc. Now a chef is expected to have a working knowledge of many cuisines. The menus of the establishments that our students will be working at have the kind of international menus that have become the norm in most fine dining  establishments. We expect them to return with a broad knowledge and appreciation of what the profession has to offer them.”

The summer program will be centered at the Waterford Institute of Technology, which is the leading provider of culinary education in Ireland. Students will earn three class credits while being exposed to Irish – and therefore European- business practice, coupled with training in specific regional and national food products. There will also be theoretical sessions and cultural programs. The itinerary includes training at seven professional kitchens with recipes focusing on Irish cuisine as well as butchering and banquet preparation techniques. Sister technical colleges from Albany and North Georgia will also be sending representatives to the summer program.

About Culinary Arts: Columbus Technical College offers both a diploma and an associate’s degree in culinary arts. The program started in summer of 2016 with four students and today there are 24 students enrolled. The average starting salary in Georgia for a chef or head cook is nearly $34,000 per year (*Source: U.S. Bureau of Labor Statistics, May 2016).